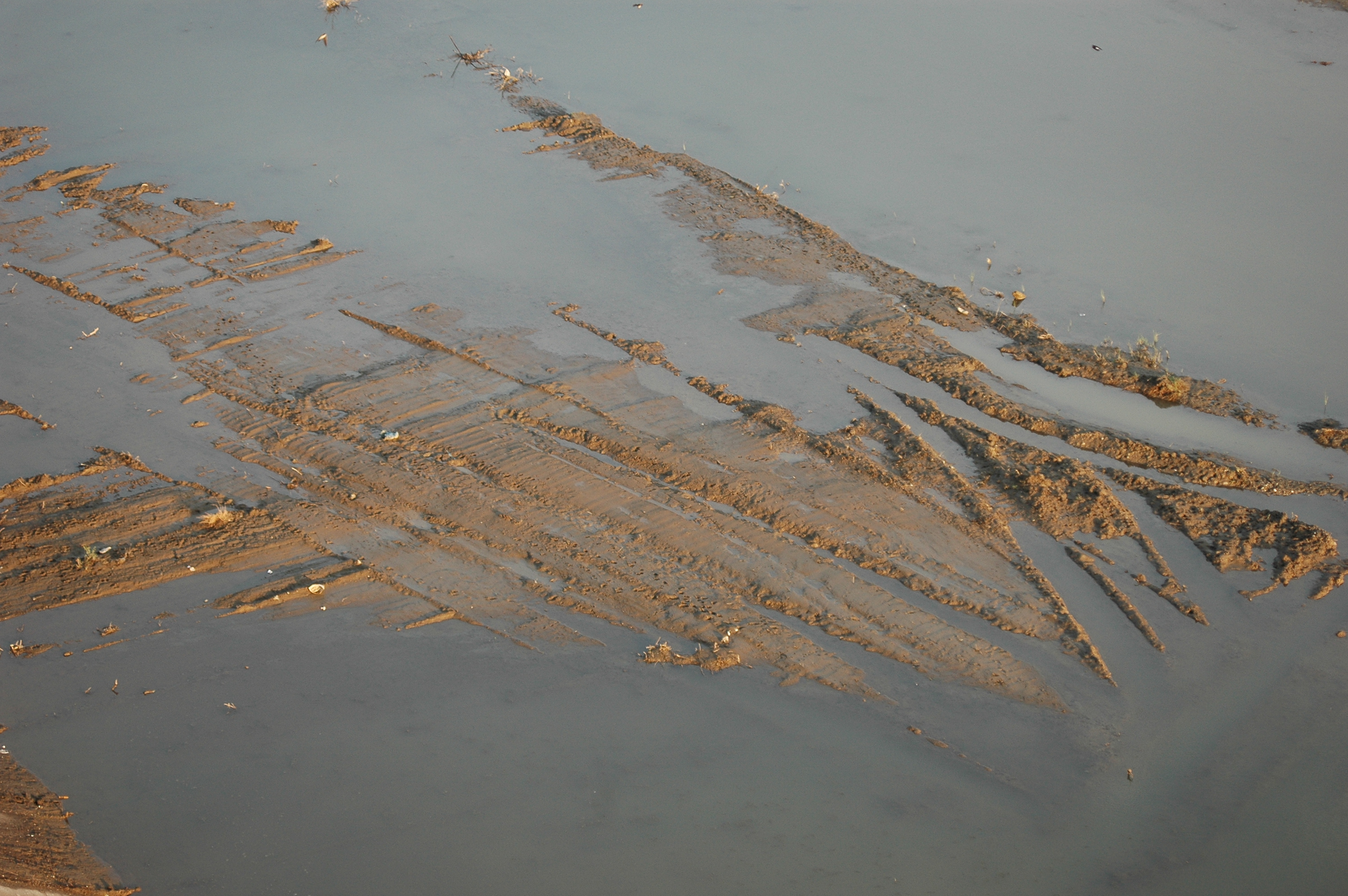 Daniel Stancu’s beginnings as a “professional” artist in the field of visual arts can be located in the mid-90s, when he began his apprenticeship at the Art High-School in Rimnicu Vilcea, where he studied, like all those who wish to become professional artists, drawing, painting and modelling. Chance brought Daniel the opportunity to study tapestry with Traian Boicescu and, later on, chance was, again, the one that directed him towards art restoration, and he joined the team led by Tudor Popescu.

For his university education, Daniel Stancu chose painting, and those who helped him hone his skill were artists Nistor Coita and Petru Lucaci. After graduation, he has worked mainly in the field of painting, but he hasn’t turned his back to other forms of artistic expression, working alternatively in graphics, ceramic, installations, performance or land art.

At a first sight, Daniel Stancu’s artistic creation is divided in two main areas: easel painting and that which we traditionally call “icons”. Upon closer examination, it becomes obvious that these two areas merge and coexist to the point of symbiosis.

His “easel painting” has developed around several major themes: the house, the mystical shirt and the chalice. His main themes are, of course, classic ones, having been approached in time by many great artists.

The neo-Orthodox current, developed in Romania by artists who are now Romanian cultural legends, appeared to have exhausted this source of themes, so that it had become very difficult to offer a new approach in the area. But Daniel Stancu had the courage, primarily the courage before himself, to try voicing his personal artistic opinion about these themes.

The house can be for the artist either a peaceful abode or a fortress, at the times when it turns into a cula (when it becomes a “Citadel” – “Cetatea”, or a “Fortress”– “Fortareata”). In the first case, the house – “Casa” – is a pretext for being in the middle of nature and for entering in a dialogue with it, it is a bridge between man and what surrounds him, a personal centre of the Universe. Aside from the representations in painting, Daniel makes installations that are very close to conceptual art. Thus, the house is rendered through the modules that compose it – cubes – and the roof detaches itself from them, turning into a triangle. The cula is the other instance of the house. It holds the house, raising it to the top storey, becoming thus a fortress that doesn’t enclose, but instead uplifts. A dialogue with the house must have the well in close proximity. If represented by itself, the well becomes an axis mundi, competing wit the centre proposed by the house. 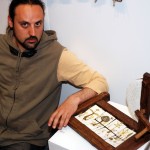 The mystic shirt is, in the case of Daniel Stancu’s painting, the clerical kamilavka, the monk’s head covering. The artist sees it as being made of three “wings”, two in front and one in the back, rendering it according to his vision. He sees this head covering not as a concealing garment, but rather as an interface between the wearer and the world. It is not yet a “Garment of Light”, but it goes beyond the functional. An installation exhibited at the Village Museum in Bucharest shows it amongst the  various functional components of a household brought from Berbesti. This time, the shirt-object is made of sackcloth and it covers and old chest used in the past for storing grain – maybe even wheat, the symbol of rebirth.

A ladder begins it’s vertical trajectory from the coffer. The shirt is the cloth that covers a sacred tomb. But we think of resurrection, not of death.

Daniel Stancu’s chalice is a “bearer of Holy Gift”. The Gift is represented through chalices with eyes, chalices with wings, friezes of chalices on an axis. We can thus think of that chalice of sound the artist says is the bell.

Going from easel painting to the artist’s “icon objects”, we have to stress that Daniel Stancu does not see himself as an icon painter-craftsman, but as an artist who borrows in his reading parts of icons for his paintings. During his formative years, the contact with the detail of the church painting has had a major impact on his artistic vision.

In his love affair with the conceptual and execution perfection of Orthodox icons, the artist has tried to find a way of translating them into contemporaneity, without transforming them through his interpretation. In what he himself calls “alternative objects”, the artist plays with fragments of icons, with pieces of sacred texts – which today’s viewer can no longer decipher – and tries to propose a new way of understanding them, based solely on sensitivity and on openness towards artistic beauty. Because Daniel Stancu has the courage to challenge us to return to beauty in art, at a time when this concept is almost obsolete.

Although the technique used for painting sacred figures is traditional, the medium he works with is unconventional. Thus, the portraits adorn old household objects found by the artist, belonging to forgotten times: sieves, cask staves, planks from wooden fences, pieces of dowry chests or of weaving looms. Daniel Stancu selects the objects depending on what artistic use they suggest to him. Thus, the sieve becomes a wing, the stave a module, the fence planks reminds him of the Stylites, the Pillar-Saints. He uses the primary shape of each object to determine the composition, because he believes there must be a dialogue between image, the old object and the new. Therefore, what may seem like an icon to us at a first sight is in fact an object which – although not necessarily intending to – may become sacred, depending on how the viewer sees it.

Seeing Daniel Stancu’ painting and alternative objects, we can logically expect his next step, his involvement in another alternative project. Thus, the artist observes for one year, using photographs and sketches, a work of land art created by children on the edge of a river. He calls his work “Cetatea copiilor” (“The Children’s Citadel”) and attempts to find in it meanings that are remote from the intention of those who produced it. It could even be an appropriation of their “artwork”. The photographs of a cross dug into the earth make up the documentation for the series of drawings called “Flux”. The artist’s intervention is mainly conceptual in the project, his quest being once again for major themes such as the earth – in which the construction is located –, the water – which sometimes floods it, a carrier of meaning, and their movement in time, captured by the camera.